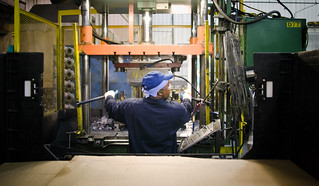 The use of advanced high-strength steels (AHSS) in the automotive industry is on the rise, affecting how manufacturers use automotive die stampings to create Class A panels and structural parts. The new generation of AHSS calls for new die architecture, which means the industry can expect higher design- and construction-related costs.

The Introduction of AHSS

Throughout the last 25 years, automotive die stamping was a relatively simple process. Because of lower production volumes, engineers reduced the cost of automotive stamping dies and the number of dies needed to stamp a part by minimizing the detail requirements and machined content.

As the automotive industry prepared for the new federally mandated Corporate Average Fuel Economy (CAFE) standards to reduce energy consumption, manufacturers had to figure out how to make cars with an average fuel economy of about 30 miles per gallon for 2016 models and 54 miles per gallon for 2025 models. The options include creating vehicles that don’t run on gasoline or those that weigh less. Most manufactures opted for the latter.

To reduce the mass of vehicles and maintain their structural integrity, the auto industry turned to AHSS, as its tensile strength exceeds 1,000 megapascals.

With the introduction of AHSS, auto manufacturers found that the traditional automotive die did not work as intended and wasn’t strong enough. AHSS requires a new die architecture and frequent use of re-strike dies along with more maintenance, cooling, lubrication and more dies per line. Consequently, material utilization decreases while tooling costs and spring-back increase.

Instead of using three or four dies to manufacture vehicles, the industry will have to use six with AHSS at lower volumes of production, making the automotive die stamping process ultimately less efficient and more expensive.

Sinotech offers high-quality automotive die stamping and custom metal stamping services at competitive costs. Contact Sinotech today to learn how you can incorporate AHSS into your applications and keep your costs to a minimum.

[Photo by U.S. Department of Agriculture via CC License]